Hey Everyone!
I just wanted to put out a big THANK YOU to everyone who stopped by the booth at the show yesterday!  The turnout was amazing!  It was so cool to chat with old friends and make some new ones as well!  Quite a few bookings were made and space for the summer is starting to fill quickly.  If you were on the edge of getting your name in the books, let me know as soon as you can.  Yesterday was the spark that ignites the fire for a great season of fishing and guiding ahead!  Hope to hear from you soon! 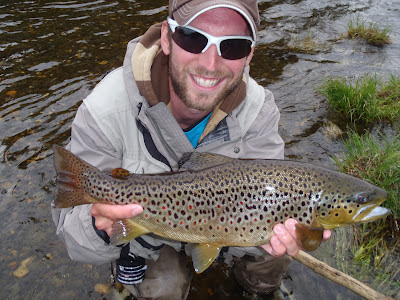 Posted by Fish Story Guide Service at 5:18 AM No comments:

Hi Everyone!
Tom Jutras and I will be back in a booth together this Saturday at the New Hampshire Fly Fishing Show in Manchester NH!  I will be running my "Show Deal" once again as well.  If you book a trip at the show, take $25.00 off your trip!  I will also have some Feedinators available as well!  Looking forward to seeing everyone and talking some fishing!

Posted by Fish Story Guide Service at 5:23 AM No comments:

So, here we are.  After a nice January thaw, we are back into wet heavy snow.  The fisherman in me says, "Good, it will replenish the rivers", the runner in me says, "CRAP!"  I was just getting used to the idea of running in shorts and a t-shirt in January.  We had a snow day from school and these little things certainly help as far as being able to catch up on my chores.  I have been meaning to get to a little 2015 recap of sorts, but I kind of like the idea of sharing my favorite pictures instead.  Here we go! 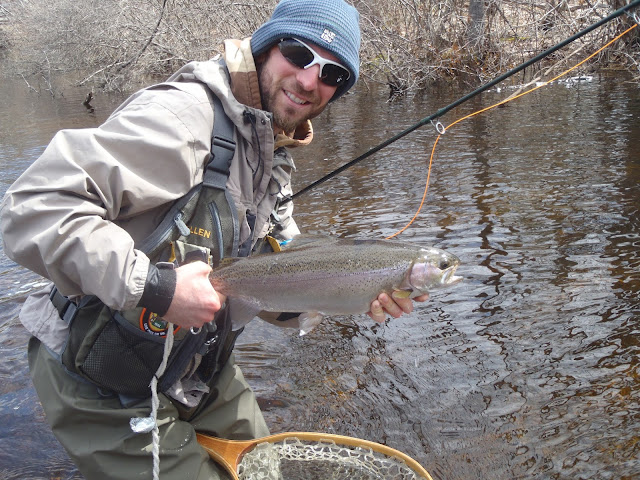 This was one of the hardest fighting early season rainbows that I can remember! It was also a great way to start off the season and scouting for guiding. 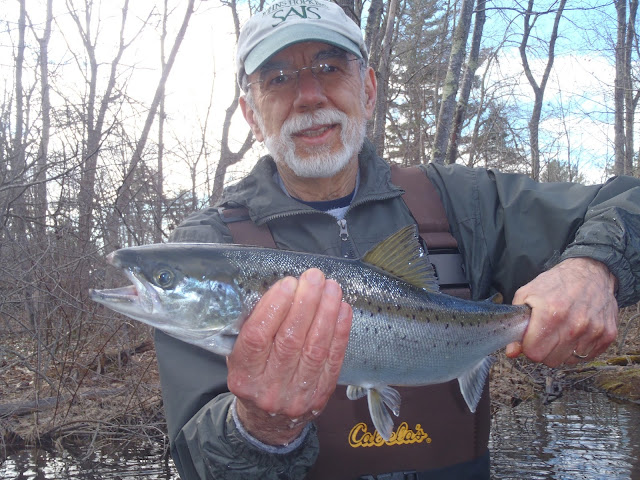 This was Ed with his first ever Salmon on a fly rod!  He hooked this fish in the first five minutes of our trip and played it like an expert.  I didn't even have time to tell him to bow the rod when the fish was doing cartwheels! 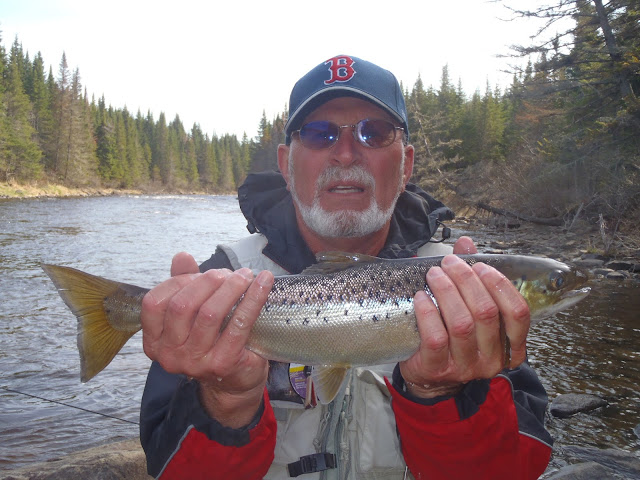 My father with a nice Salmon in the Connecticut River in May.  It was one of the first Salmon caught during the "spring run" that season. 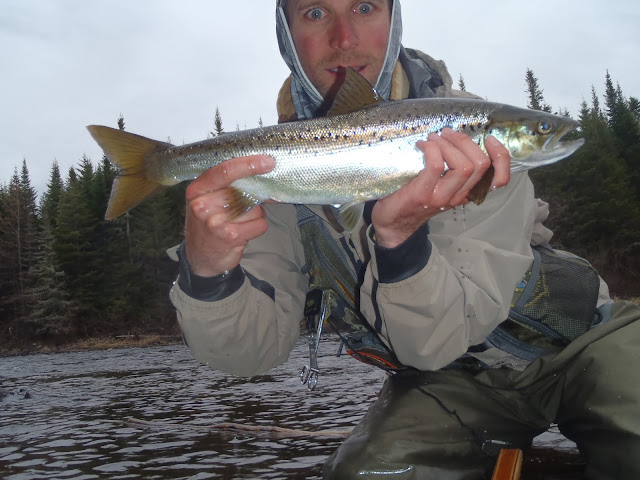 This was my first Pittsburg Salmon of the 2015 season.  They always stick in your mind I think due to the anticipation of a full season yet to come! 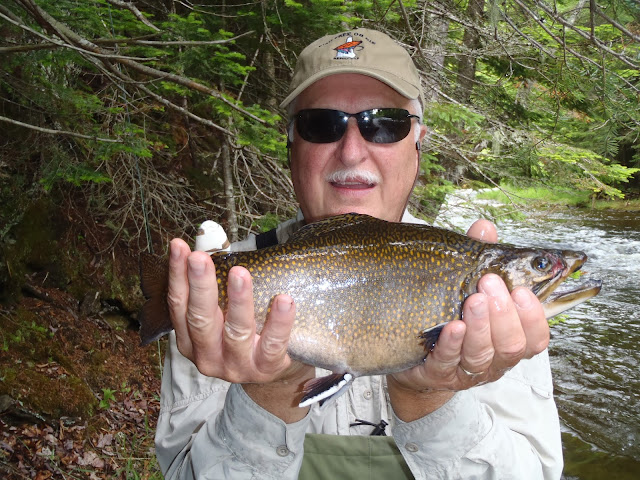 This was Ron with his largest Pittsburg Brookie.  This fish was just a slob and was a blast to hook.  I was able to spot the fish lying at the end of a run and Ron made the perfect drift in order to fool him. 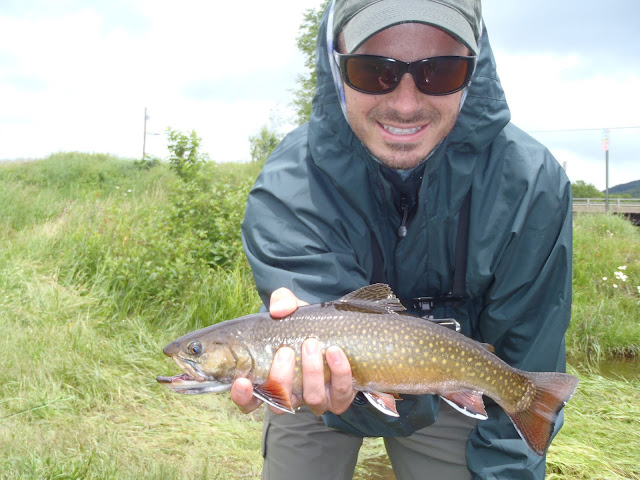 This is Kevin with a completely wild Brook Trout from over in Maine.  Kev and I like to explore and decided to check out some of the historic fly fishing areas that day.  It was 4:00 AM - 10:00 PM of dirt roads, fish, rivers, history and wildlife.  I will remember the fun in trying to find all of these locations! 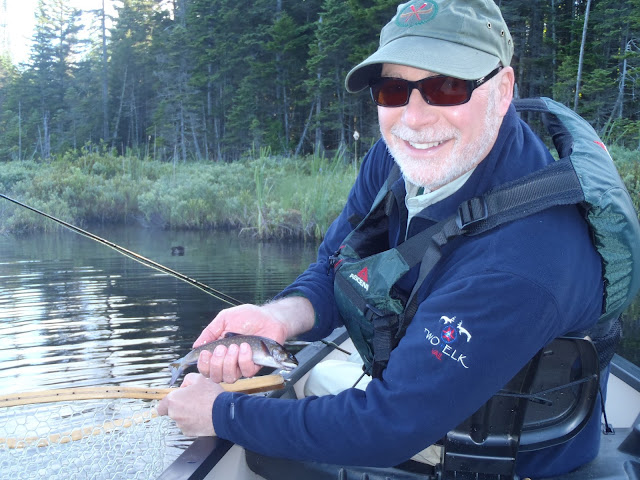 This is Mark with his first ever dry fly Brookie!  After a couple of days of wading the river, we thought it might be fun to switch it up and hit some back woods ponds for rising trout.  This was just a perfect morning with rising fish and calm waters until the very end! 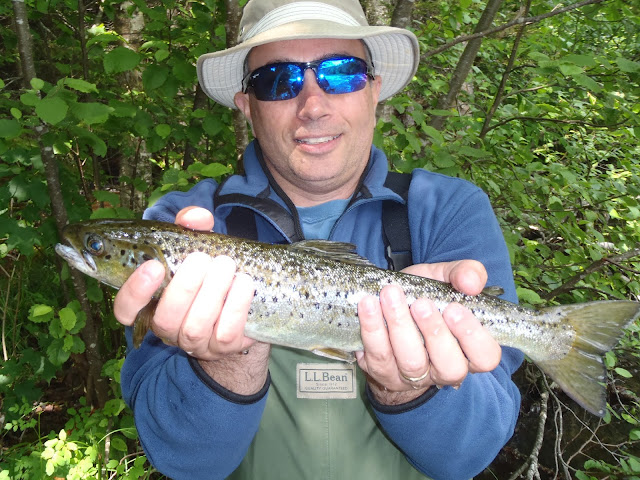 I will never forget this Salmon!  Joe hooked this beast in the trophy section of the Connecticut in mid summer.  The fish was literally holding in about 2 feet of whitewater and exploded down the river when it was hooked.  I ran down the middle of the rapids to get behind it and scare it back up to where Joe was when he initially hooked it.  I must have run almost 75 meters down the middle of the river to catch up to it!  I can not believe it stayed hooked! 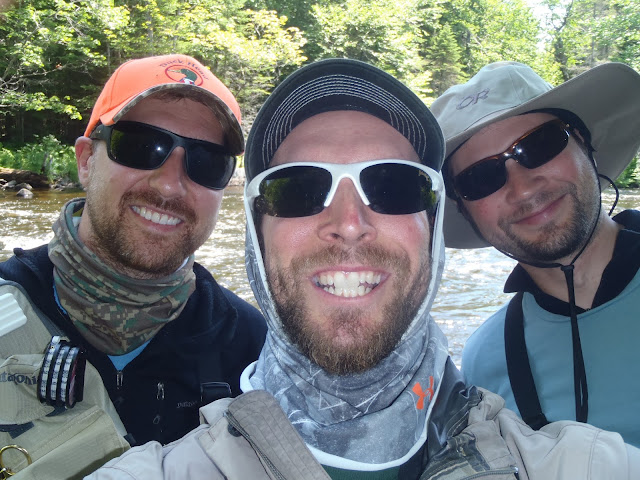 "The WOLF PACK!"  These two guys were just plain and simply fun to guide!  We had more adventures in those few days than some people have on the water in a season!  Never a complaint, never too tired to continue on and always willing to learn a trick or two, it was a blast to have them on the river! 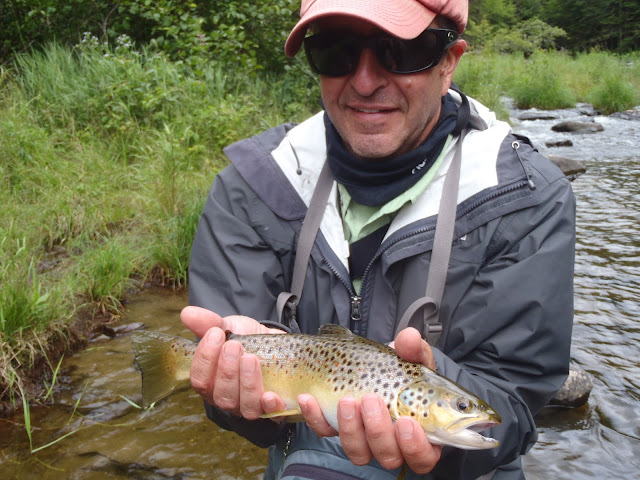 "Uncle Mike" with his famous brown trout.  Always a favorite time with family and friends! 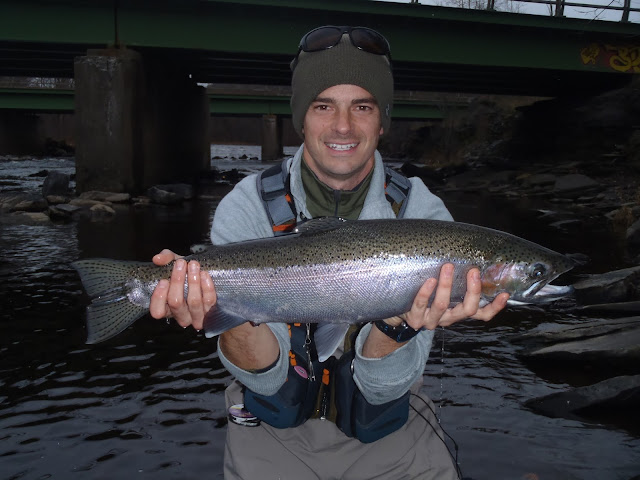 Kevin with one of his big steelhead from the Salmon River in NY.  This is an annual trip that we go on every Thanksgiving and we plan to keep going on for the rest of our lives!  Way too many fun stories over the years! 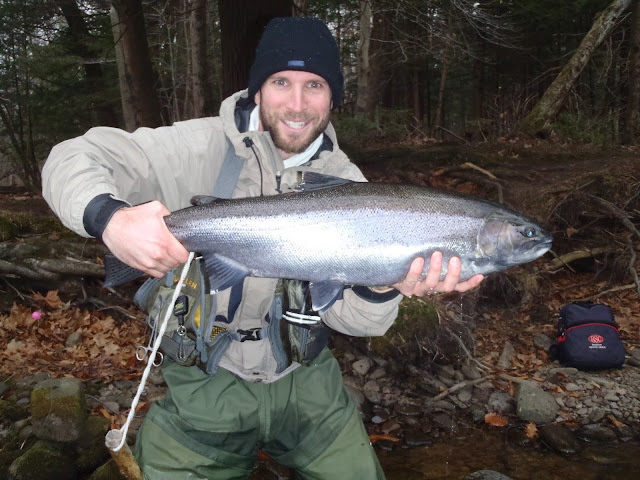 My largest steelhead of the fall.  Also from the Salmon River in NY. 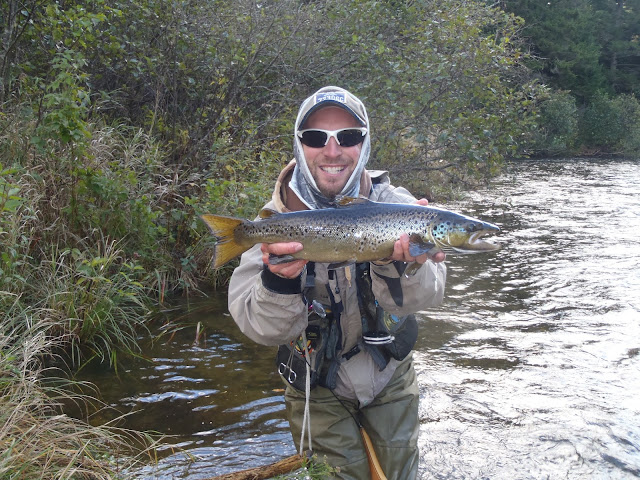 My last Pittsburg Salmon of the 2015 season.  You know the story on this one....

Posted by Fish Story Guide Service at 9:30 AM 2 comments: