What a weekend!  Sometimes all you can do is just make the best of the hand you are dealt.  Well, we were dealt temps falling through the 40's into the 30's and pouring rain, then temps hitting the upper 20's and snow/sleet and eventually, just as it was time to head for home, 60's and sunny!  That is Pittsburg for you!  The toughest part for us was just the amount of rain we had and how high the rivers eventually became.  I could have headed over to some ponds and went for some stockies, but I had the day off from guiding and decided to do what I enjoy the most:  Explore for wild brookies and salmon!  The choice was confirmed correct as I was able to land one of my largest wild Pittburg brookies as well as about a dozen 15-20 inch salmon. (Insert "I got lucky" cliche'. "Even a blind squirrel finds a nut", It's better to be lucky than talented"... etc.)  The conditions in the river will continue to be very tough over the next several days as the flows are completely out of control right now.  I have added a couple of pictures and a video for those of you who are familiar with Pittsburg.  Can you say high water!?
Patrick@fishstoryguideservice.com
﻿

It is starting to feel like we are truly on the doorstep of summer and all of the wonderful things that summer fly fishing in Pittsburg has to offer.  I have been up north quite a bit lately and though the fishing has not been predictable, it has had it's moments of glory.  I found some salmon and wild brookies in a few hike in only spots that always seem to produce in the early season. 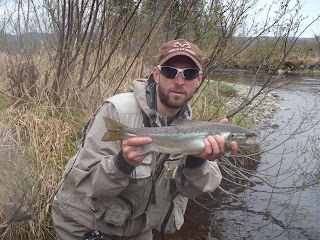 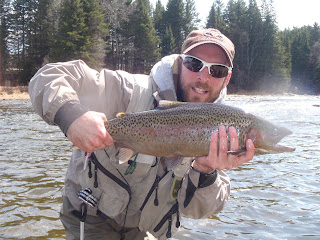 I have a lot of people ask me what it is about Pittsburg that makes it so special for me.  To be honest it is a lot of different things.  I have a sentimental attachment to the whole area as it is where I learned to fly fish when I was six years old.  We had a camp on the first Connecticut lake when I was young and it was there that I really felt the draw of this wild area.  I learned the majority of my outdoor skills in the area and I still have the same sense of comfort in the woods and rivers of Pittsburg that I did when I was exploring as a teenager.  I think what I enjoy the most is that even though I have been all over Pittsburg for many years, I still know that it has so much more to offer than I will ever have time for.  My goal for this summer is to get to as many unexplored areas as possible when I am not guiding and add to my Pittsburg knowledge.  I look forward to getting back out with return clients and very much look forward to all of my new clients who are already in the books!  Feel free to shoot me an email if you are interested in my availability for the summer months!  The best is yet to come!

The Past Few Weeks...

Well, things have been moving along nicely.  Fish have been showing themselves regularly and have even been willing to bite most of the time.  Early season is fun mainly because no one really knows how the fish runs will be.  Based on what I have experienced so far this year in the southern and middle parts of the state, I would rate the fishing as "expected".  There have been some slower days mixed in with some spectacular ones as well.  At the end of April some salmon spots were past prime and some where just turning on and off.  I had a client land a 23" salmon that we were able to sight fish together.  I had a new client land an 18" rainbow that was topped a few casts later by a 20"er out of the same pool.  I do enjoy guiding for the lake run fish, as these memorable trips make it worth while to deal with the occasional tough outing.

As we moved on to Pittsburg at the tail end of April and over the past couple of weeks, the search for "monsters" continued and was closely followed by the first few salmon.  Two weekends ago I put in a lot of hours and was rewarded with some monster bows.  I just returned from Pittsburg about an hour ago and can say that I had a lot of fun fishing with my dad this weekend instead of actually guiding.  Even though sometimes "guiding" my father can present its own set of interesting adventures.  The largest salmon we saw in Pittsburg this weekend was right about 18" or so and the average fish to net was 12-15 inches.  Not monsters, but for their size they fought harder than the 20 inch fish we have been catching in the central part of the state.  I am really excited for the start of the guiding season in Pittsburg and want to thank all of the clients who have already booked trips for the summer.  June is fully booked and the beginning of July is getting packed as well, but I do still have days available in mid-late July as well as August.  Please let me know if you are thinking about coming up north and would like to give Pittsburg fly fishing a try!


Posted by Fish Story Guide Service at 4:04 PM No comments: